Create an Account - Increase your productivity, customize your experience, and engage in information you care about.

The Town of Northlake Canvassing Authority conducted the canvass for the General May 7th Election on May 17, 2022.

Election Results will not be posted until Denton County Elections Administration has finalized the reporting of all precincts.

During Early Voting, registered Town Voters can vote at ANY polling location throughout Denton County.  A full list of  locations can be viewed by accessing the Denton County Elections Administration.

Early Voting will begin April 25th and end on May 3rd as follows:

On Election Day, registered Town Voters can ONLY vote at their ASSIGNED precincts as follows:

Election Day results can be viewed by accessing the Denton County Elections Administration. 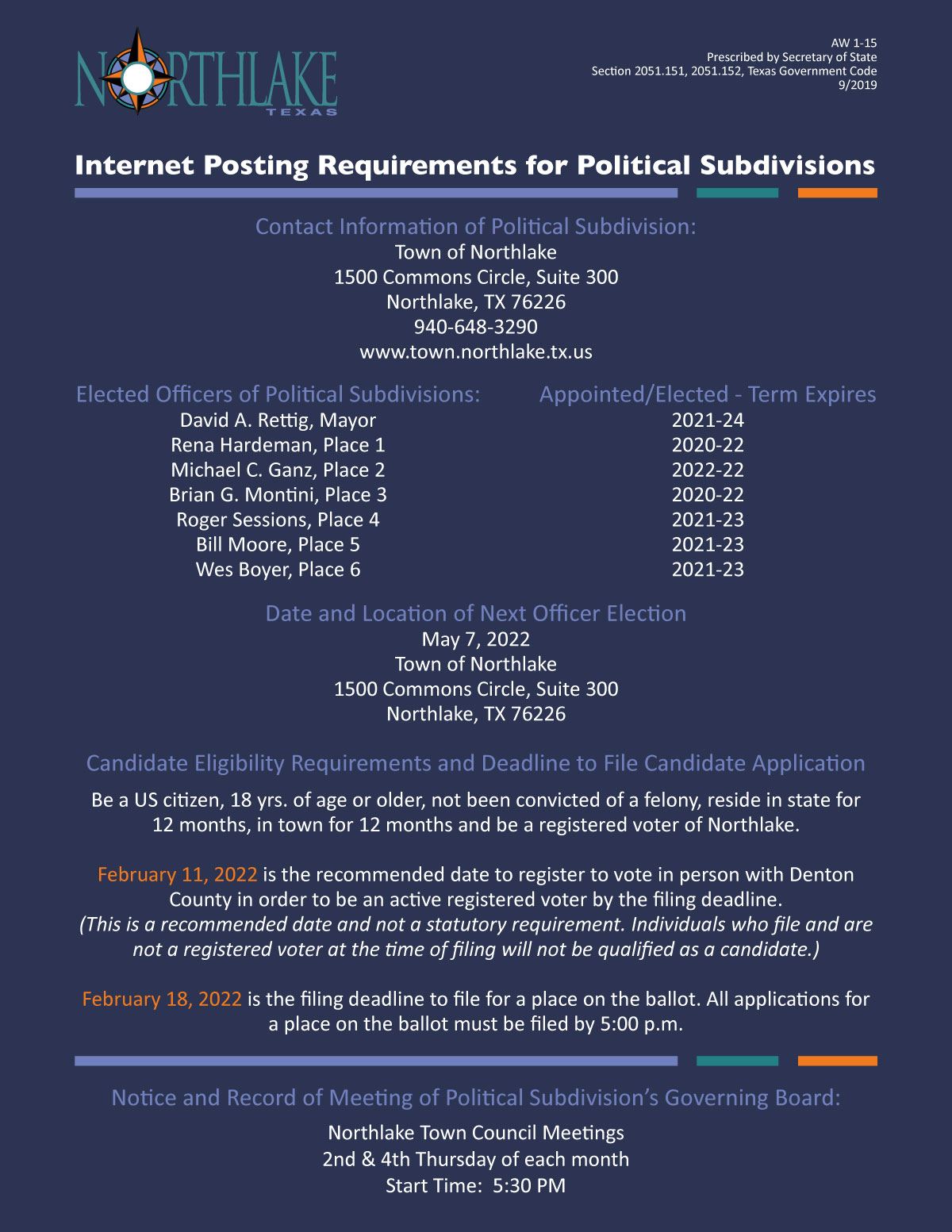 The Town of Northlake General Election will be held on Saturday, May 7, 2022. Residents who are qualified voters will be electing Council Members for the following places:

A member of the Council who ceases to possess any of the qualifications specified in the Texas Election Code or in this section for a period of sixty (60) days following notice from the Town Secretary regarding same, or who is convicted of a felony while in office, shall immediately forfeit the office and the Town Council shall proceed to fill the vacancy in accordance with Section 3.09 of this Charter.

(a)  To be eligible to be a candidate for, or elected or appointed to, a public elective office in this state, a person must:

(2)  be 18 years of age or older on the first day of the term to be filled at the election or on the date of appointment, as applicable;

(3)  have not been determined by a final judgment of a court exercising probate jurisdiction to be:

(A)  totally mentally incapacitated; or

(B)  partially mentally incapacitated without the right to vote;

(4)  have not been finally convicted of a felony from which the person has not been pardoned or otherwise released from the resulting disabilities;

(5)  have resided continuously in the state for 12 months and in the territory from which the office is elected for six months immediately preceding the following date:

(A)  for a candidate whose name is to appear on a general primary election ballot, the date of the regular filing deadline for a candidate's application for a place on the ballot;

(B)  for an independent candidate, the date of the regular filing deadline for a candidate's application for a place on the ballot;

(C)  for a write-in candidate, the date of the election at which the candidate's name is written in;

(D)  for a party nominee who is nominated by any method other than by primary election, the date the nomination is made; and

(E)  for an appointee to an office, the date the appointment is made;

(6)  on the date described by Subdivision (5), be registered to vote in the territory from which the office is elected; and

(7)   satisfy any other eligibility requirements prescribed by law for the office.

The Candidate Filing Packet is provided as a resource that contains information about the Town, filing documents, and a general overview about running for office.

Pursuant to the Texas Govt. Code, Section 552.117(a)(17), documents filed by current public officials will have redactions of personal information.

Candidate filings for each place are listed in the order they were received.

The following ballot order was determined by the Ballot Draw held on February 28, 2022.